The Ranching Heritage of the Guadalupe River Valley is the centerpiece of the Chisholm Trail Heritage Museum. Visitors will experience a walk through time and legend. The story of cattle ranching in the Guadalupe Valley, its roots in cattle ranching before and after the Great Cattle drives of the late 1800s, and the enduring folklore of the Texas cowboy is brought to life in this exhibit. Rich local history, including the infamous Sutton Taylor War, pitted cattle rustling outlaws against frontier justice and introduced lawmen such as the legendary Texas Rangers. Highly selective curation of objects for authenticity puts you that much closer to history. And, there is something for everyone – interactive displays engage younger visitors with delight and humor, oral history videos showcase classic Western craftsmanship, and your visit concludes with an original short film, “Pointing Them North”, in the Museum’s Stars Along the Rawhide Trail Theater. 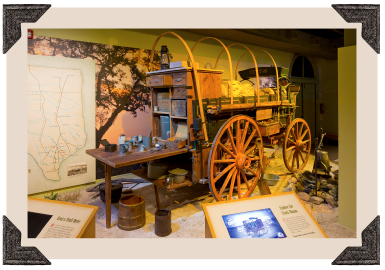 Horsemen of the Americas: Tinker Collection

Within the main exhibit is an area devoted to this prestigious collection of rare cowboy artifacts from North and South America. On permanent loan to the CTHM from the Harry Ransom Center (HRC) at The University of Texas at Austin, the Tinker Collection showcases the pride of craft shared by horsemen north and south of our borders in the golden age of working cattle on horseback. The exquisite workmanship of horse-related and ceremonial artifacts demonstrates an extraordinary level of artisanship. We are very proud to partner with the HRC to bring this very special collection to the public. 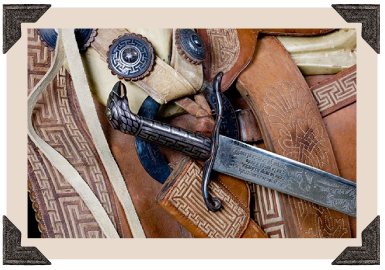 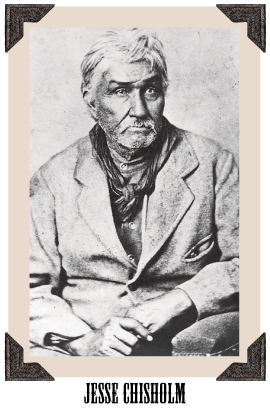 The Chisholm Trail in Texas

Welcome to our permanent exhibit, Ranching Heritage of the Guadalupe River Valley. Join us to explore the characters and stories we all thought we knew from Westerns: the cowboy, ranching, and life on the trail. Discover the local lore and history that link DeWitt County to the story of the Chisholm Trail in Texas.

The Chisholm Trail: A Great Migration of Men and Animals

“In 1883, all the cattle in the world seemed to be coming up out of Texas. When I rode up on a little hill to look for the horses, I could see seven herds behind us. I knew that there were eight herds ahead of us, and I could see the dust from thirteen more of them on the other side of the river.”
– Teddy Blue Abbott on the North Platte River, 1883

Nine million cattle were driven over trails from Texas to northern markets between 1867 and 1890. In the early years most of those cattle came from South Texas, where they were raised by ranchers who practiced a system of open-range ranching characterized by unfenced pastures, annual roundups of cattle, and long trail drives to markets. The cowboys who tended these cattle and drove them north became iconic American heroes in the 1880s and 1890s.

Feeding a Hungry Nation After the Civil War a huge market for beef opened in the northeastern United States. In 1867 cattle that could be bought for $4 a head in Texas sold for $40 a head at Eastern packing plants. That year entrepreneur Joseph G. McCoy built a 250-acre stockyard by the Kansas Pacific Railroad’s tracks in Abilene, Kansas and popularized the route of the Chisholm Trail. The trail ran north from South Texas, crossed the Red River at Red River Station in Montague County, Texas, and followed a wagon road laid out by Indian trader Jesse Chisholm across what is now Oklahoma to Abilene. As the line of settlement moved progressively west in Kansas, Abilene ceased to be a shipping point and the trail’s terminus moved westward to Ellsworth, Junction City, Newton, Wichita, and Caldwell. By 1879 a new trail, the Western Trail, which crossed the Red River at Doan’s Store in Wilbarger County and ended at Dodge City, Kansas, had supplanted the Chisholm Trail. 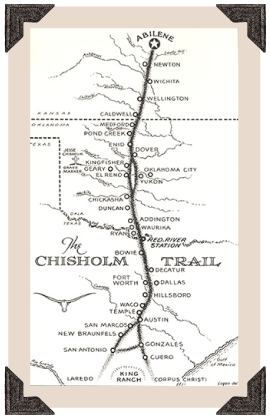 Life on the Trail Texas cattle were driven to northern markets to railheads in Kansas, then being shipped by rail to slaughterhouses and meat-packers in Chicago, from where the beef was distributed to cities on the East Coast. The cattle were moved north in herds of two or three thousand animals by contractors who specialized in trail-driving. Between 1867 and 1890 about nine million cattle walked from Texas to Kansas as trail herds. For the cowboy, trail drives meant weeks of grueling monotony and hardship interspersed with hours of very real danger. River crossings were dangerous; lightning storms and stampedes could be fatal.

A trail herd was moved by a trail boss and eight or ten cowboys. They were accompanied by a horse herd, a cook and a chuck wagon which carried a two-month supply of groceries, cooking equipment, and the cowboys’ bedrolls. On the trail, the chuck wagon was the center of the cowboy’s universe.

By 1890, railroads had penetrated into Texas and there was no longer a need to drive cattle to Kansas in order to ship them to market. Combined with the introduction of pastures fenced with barbed wire, it meant the end of the era of the great trail drives. Even so, it was merely the beginning of the world’s fascination with the legendary Texas cowboy.

Two Women Look West: Photographs of King Ranch by Helen C. Kleberg and Toni Frissell debuted at the Houston Museum of Fine Arts in 2006 and was the first time Helen Kleberg’s images were displayed for public viewing. It was also the first time her work was placed in the context of, and in comparison to, a professionally trained photographer. This Exhibit offers two distinct, yet complementary, views of a modern ranching enterprise during its heyday. Kleberg and Frissell focused their cameras on similar subjects, and their photographs communicated their particular relationship to the land. Kleberg approached her subject matter with recognition, while Frissell looked at it with a sense of discovery. Kleberg’s views of ranch life are intimate documents of her life at King Ranch. Frissell’s work confirms her act of discovery and fascination with the open land and its vast expanses. Both women had the deepest respect for their subject, of which they held separate and independent views. King Ranch was, and is, many things to many people, but to these two photographers looking west, King Ranch was their studio. Ultimately, the work of Kleberg and Frissell has had an impact on the history of King Ranch, a place whose mythic proportion they brought into focus.

MAKE A GENERAL DONATION TO THE CHISHOLM TRAIL HERITAGE MUSEUM.

BECOME A MEMBER OF THE CHISHOLM TRAIL HERITAGE MUSEUM.